Electrical motor in general is an electro-mechanical device that converts energy from electrical domain to  mechanical domain. Based on the type of input we have classified it into single phase and 3 phase motors. Among 3 phase motors, induction motors and synchronous motors are more widely used. When a 3 phase electric conductors are placed in a certain geometrical positions (In certain angle from one another) then an electrical field is generated. Now the rotating magnetic field rotates at a certain speed, that speed is called synchronous speed. Now if an electromagnet is present in this rotating magnetic field, the electromagnet is magnetically locked with this rotating magnetic field and rotates with same speed of rotating field. Synchronous motors is called so because the speed of the rotor of this motor is same as the rotating magnetic field. It is basically a fixed speed motor because it has only one speed, which is synchronous speed and therefore no intermediate speed is there or in other words it’s in synchronism with the supply frequency.

Why is a synchronous motor not self starting?

At starting position of synchronous machine, the rotor could have any alternative position as shown here.

When rotor is initially at position (a):

When rotor is initially at position (b):

Here, the unlike pole of rotor gets attracted but as explained earlier the rotor cannot attain synchronous speed immediately and remains at rest.

As a result, the average torque exerted on the rotor is zero. Due to the large inertia of the rotor, the rotor fails to rotate along with the stator poles. Hence again the difference of position of magnetic axis gets created and rotor gets subjected to quickly reversing torque. This is because the speed with which rotating magnetic field is rotating is so high that it is unable to rotate the rotor from its initial position, due to the inertia of the rotor. So under any case, whatever may be the starting position of the rotor, synchronous motor is not self starting.

Methods of Starting a Synchronous Motor

Each of these methods of starting a synchronous motor is described below in detail.

If the rotating magnetic field of the stator in a synchronous motor rotates at a low enough speed, there will be no problem for the rotor to accelerate and to lock in with the stator’s magnetic field.The speed of the stator magnetic field can then be increased to its rated operating speed by gradually increasing the supply frequency f up to its normal 50- or 60-Hz value. This approach to starting of synchronous motors makes a lot of sense, but there is a big problem: Where from can we get the variable frequency supply? The usual power supply systems generally regulate the frequency to be 50 or 60 Hz as the case may be. However, variable-frequency voltage source can be obtained from a dedicated generator only in the olden days and such a situation was obviously impractical except for very unusual or special drive applications.

But the present day solid state power converters offer an easy solution to this. We now have the rectifier- inverter and cyclo-converters, which can be used to convert a constant frequency AC supply to a variable frequency AC supply. With the development of such modern solid-state variable-frequency drive packages, it is thus possible to continuously control the frequency of the supply connected to the synchronous motor all the way from a fraction of a hertz up to and even above the normal rated frequency. If such a variable frequency drive unit is included in a motor-control circuit to achieve speed control, then starting the synchronous motor is very easy-simply adjust the frequency to a very low value for starting, and then raise it up to the desired operating frequency for normal running.

When a synchronous motor is operated at a speed lower than the rated speed, its internal generated voltage (usually called the counter EMF) EA = K_! will be smaller than normal. As such the terminal voltage applied to the motor must be reduced proportionally with the frequency in order to keep the stator current within the rated value. Generally, the voltage in any variable-frequency power supply varies roughly linearly with the output frequency.

2. Motor Starting with an External Motor: 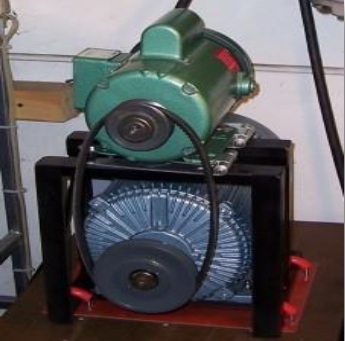 When the stator of such a synchronous machine is connected to the 3-Phase AC supply, the machine starts as a 3-Phase induction machine due to the presence of the damper bars, just like a squirrel cage induction motor. Just as in the case of a 3-Phase squirrel cage induction motor, the applied voltage must be suitably reduced so as to limit the starting current to the safe rated value. Once the motor picks up to a speed near about its synchronous speed, the DC supply to its field winding is connected and the synchronous motor pulls into step i.e. it continues to operate as a Synchronous motor running at its synchronous speed.